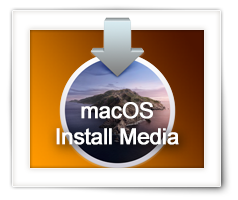 In this article, I’ll show you the steps to create macOS install Media …

As most Mac users will know; each new macOS version comes with a few challenges. For some it’s nothing, for other it’s a disaster.

Catalina is one of the latter, a disaster for quite few amongst us, due to changed security rules and the lack of support of 32 bit applications.
Some of my favorite tools simply no longer work, and as a developer this makes me nervous when considering switching to the latest and greatest.

For this purpose I always create a virtual machine in VMWare Fusion, running the macOS version that I ran before the update.
This comes with challenges though, since Apple, in their infinite wisdom, does not simply provide macOS install media (eg. a DMG or ISO file) so you can install another version of macOS. We have to create our own.

Note: Here I describe how to create macOS install media, either as a bootable USB stick to do a fully clean macOS install for your Mac, or a DMG file, for example to setup a virtual machine.

Getting the right file to create macOS install media

To create macOS install media we will need to extract the right files from the application which would execute the “upgrade” for us (for when the user originally intended to upgrade their macOS).
With this I mean: when upgrading to a newer macOS, we usually get (or your Mac does it for you) an application called something like “Install macOS Mojave”, which can be found in your Applications folder, before executing the update.

Depending on a few things, your Mac may or may not start the installation process after downloading.
Abort this installation, as it will overwrite your current OS and the needed files will automatically be removed after that, preventing you from creating install media.
You can quit the application/installer by making sure the installer is the active window and pressing the ⌘-key and the “Q”-key.

There are several shady files and/or DMG’s out there, which may spare you the work.
My advise: Only use the version from the Apple App Store! Do NOT use 3rd party files unless you know what you’re doing!
Downloading from a 3rd party invites shady and malicious versions.

I’m estimating that worse case scenario, you’ll need up to 16Gb of free space on your disk before you start this process.
In reality it will be a little less, but better safe than sorry.

Once you have your Install Media, be it USB stick or DMG image file, you can delete the file you downloaded in this step – it takes up quite a bit of space.
It is located in your Application folder and called something like “Install <macOS version>“, for example “Install Mojave”.

After downloading the right file from the Apple App Store:

Now Apple is not totally ignoring the end user when it comes to making install media – it’s well hidden (in my opinion) in this Apple Knowledge Base article.

The Install application would have been much more user friendly experience, if Apple would have just offered the option “Create Bootable macOS Install Media”, but instead we need to resort to Terminal.

The listed commands below will create a bootable install media on a USB disk/stick that has been insert already AND is mounted as “/Volumes/MyUSBDrive” – obviously, this will be named differently on your Mac.

This USB stick or drive also needs to be at least 8Gb and should be formatted for use with your Mac
To properly format the disk in “Disk Utility“, use “Erase” to erase and format the disk with Format: “Mac OS Extended (Journaled)“,  Scheme: “Master Boot Record“.

It is recommended to use a USB 3.x stick or drive when your Mac supports this – installation will go a lot faster.

If your Mac is using macOS Sierra or earlier, include the --applicationpath  argument, similar to the way this argument is used in the command examples for Sierra and El Capitan.

As with option 1, we of course first will need to download the right file from the Apple App Store.

This option is useful in case we do not want a USb stick or drive – for example for a Virtual Machine, we’d rather have a DMG, as it’s much faster when installing macOS on your Virtual Machine.
The Apple script doesn’t provide for this (it kinda does, but you might as well follow these steps).

We use “sudo” on Terminal, for which we will need an account with admin rights and “sudo” will ask for your password!

I’m labeling the DMG “InstallMedia“, for example purposes. You can use a different name (eg. Mojave, Sierra, etc) in the scripts, or to avoid typos: simply rename the resulting DMG to your liking after all these steps.

Short version for the impatient

Here all steps combined, please note that you will have to make sure the proper filename is chosen to create the macOS install media.

Just a warning: simply copying and pasting is a bad idea unless you know what each step really does.

This example is for Mojave:

As far as I know, you can create this file in most of the user-accessible directories.
I did it on the Desktop, but doing it in your Downloads directory may be a good (or even better) location as well.
We need to tell Terminal first to go there:

First we will need to create an empty disk image that can grow and only takes up the amount of space really used – a so called Sparse Disk.

From the Wiki page:

Step 3 – Attach the Sparse Disk as a Disk

Which results in something like this (different on your Mac):

In Terminal, for Mojave (change “/Applications/Install\ macOS\ Mojave.app” with the filename of the macOS version you are using):

It will ask if you want to continue, type “Y” key and press Enter.

Depending on your Mac this may take a few seconds, and will show something like this:

So we can create a macOS install media DMG file, we will need to detach the Sparse Disk:

Again in Terminal (the name “Install\ macOS\ Mojave” depends on the macOS version you’re creating install media for – if unsure, see what is in the “/Volumes” directory):

Which just give a simple “disk ejected” message.

After this step we will have a macOS install media in the shape of a DMG file.
Feel free to rename, copy and/or move it around as any other file.

Execute this in Terminal:

This shouldn’t take too much and time, and is this is what the output could look like:

The last step is removing the Sparse Image of your macOS install media.
Don’t forget to also remove the installatie application in your Applications Folder (it takes up quite a bit of space).

Since I use VMWare Fusion, here the quick steps to create a new Virtual Machine from your DMG.
It is super simple, so here a short video to get you started – make sure to select the correct macOS version in the VMWare Fusion window (here I use macOS 10.14 – Mojave)…