Play any Split screen Game, Full-Screen on any 3D TV (like Dual Play) 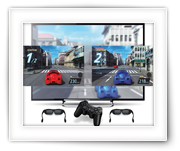 With the introduction of LG’s Dual Play “technology”, two players playing a splitscreen game, can now each enjoy playing with a full screen view for each player at the same time. Sony has something similar called SimulView for active 3D TV’s.

This sounds very high-tech and maybe even confusing,… but it’s not. It’s actually the simple [ab]use of existing 3D technology of your 3D TV in a smart way.

In this article we will show you what Dual Play does and how it works, but also … how to use it with older split-screen games that do not claim to be Dual Play compatible. The trick works with ANY split-screen capable game, on ANY passive 3D TV. Even your old original XBox or PlayStation can do this … as long as the game supports split screen playing for 2 players.

Active 3D TV’s might work as well, but you might have a harder time finding suitable glasses.

I’ll first explain how the method used by LG (Dual Play) and Sony (SimulView) works to give you an idea how it works.
With that basic information I’ll show you how to do this exact same thing with ANY split screen capable game on ANY passive 3D TV.

Note : This trick should technically work on active 3D TV’s as well, but finding suitable glasses might be a challenge. Sony for example has a system called SimulView which does basically the same with Active 3D glasses (if I’m not mistaken).

What do you need:

Tip : For those with Active 3D TV’s, check out the XPAND DualView Gaming glasses (untested on my end), which are claimed to be able to be switched between regular 3D mode and Dual Play mode. See also XPAND products at Amazon.

What is Dual Play or SimulView?

A while ago, a lot of commotion was made by LG when they announced their “Dual Play Technology“, dito for Sony who brought SimulView … it’s awesome for sure, but I would most certainly not call it “technology” or “revolutionary” …. but smart it definitely is!

Alright, let me try to explain this …

There are games around that allow so called split screen gaming. One half of the screen is for player 1, and the other half is for player 2.

Quite often this is the upper half versus the lower half, but some games allow left versus right as well.

I’ll take as an example “Call of Duty: Ghosts” on the XBox One. This game is actually Dual Play capable (enable it under the graphics settings), but we’ll use it as an example.

Start the game, go to Multiplayer mode, choose Local Play, add the second player and you have split screen gaming. You and your buddy can sit on the couch and play in the same game, on the same console, on the same TV. The annoying part is of course that you can get distracted by the screen half of the other player, and that your view is fairly limited.

With the arrival of 3D TV’s, an interesting technique can be used, called Top-And-Bottom (see also: How 3D Movies Work – Top-And-Bottom 3D or Over-Under 3D Format). If you’ve read the article and looked at the Top-And-Bottom technique, you’ll see what they are doing here … using the existing method of displaying two images on top of each other. 3D Top And Bottom (Over And Under)

The problem is however that this was designed for 3D movies, where the viewer actually sees both pictures at once to generate a 3D feeling. For this one lens of the 3D glasses allows you to only see the first image (1L), and the other lens allows you to see only the second image (1R).

By modifying the glasses we can make it that one player sees only one image, and the other player the other image.

The modification is simple, and we need two different pairs of glasses.

This way each player sees only ONE image, full screen (see images below). Obviously you don’t need to do those modifications yourself, since these kind of glasses can be bought for a few bucks. Either from LG or any other Chinese party that’s selling it. I found a set of 4 pairs of glasses for about $10 at Amazon. Either get them here or Google for “Dual Play Glasses” and you’ll find some cheap ones with ease for example at eBay.

Note : You will have to switch your 3D TV to TB 3D mode to use this method.

Note : For split-screen that are side-by-side this trick will work as well, by using 3D SBS instead of TB.

Tip : You can try this with you existing 3D glasses without having to modify them: cover one lens with your hand and see image one. Now switch and cover the other lens and you’ll see image 2.

Tip : Really cheaper Passive 3D glasses can allow you to actually pry apart the glasses and swap the lenses. Note that the better 3D glasses will not be suitable for that specially when the lenses are not symmetric and curved. Dual Play without Dual Play, for ALL Passive 3D TVs and ALL split-screen games

The good part of using Dual Play is that it’s geared towards this specific use … but if you don’t mind that you’re players might be a little bit more slender, then this exact same trick can be used with ANY split screen game on ANY Passive 3D TV.

The examples below are based on “Call of Duty: Ghosts” with Dual Play DISABLED on an XBox One.
It can be applied to ANY split screen game, even if it’s on the first generation XBox or a PlayStation 1 …!
Of course ONLY with a 2 player split screen! Step 2: Switch your TV to Top-And-Bottom (TB) or Side-By-Side (SBS) depending on the type of split screen

You’ll now see a mess on the screen of course since 2 images are being mixed into one: Step 3: Each of the two players gets a pair of glasses and sees their “own” screen

When you look through regular 3D glasses (as a test for example, before buying Dual Play glasses) we wil see the separation of the mixed image.

Below: Player One stands near a building with construction materials, player two stands in a jungle like setting.
I intentionally tried to hold the glasses in front of the camera. The building of Player One’s screen (upper right) is visible in the mixed image. You can see that with the screen of Player Two where the lens of the glasses is not covering that part. This is what the left eye sees (Player One) This is what the right eye sees (Player Two)

To prove that it works with older games as well, here some snapshots using the Zombies option in “Call of Duty: Black Ops II” on an XBox 360: