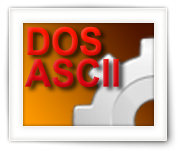 I used to have a Microsoft DOS 6.0 manual laying on my desk for the sole purpose of having an ASCII reference table. I mean literally only for that purpose.

As I started dabbling in HTML, back in the day, I created a small table on the old WeetHet website for HTML codes, only to find that I every now and then run into the limitations of that table when I’m coding …

So here, for those who care for it, a table showing all 256 ASCII (DOS) characters and their HTML counter parts … including the decimal value, hexadecimal value, HTML numerical code, HTML alpha code, display as HTML character, display as DOS character, and te descriptions that go with it …

First of all, you’ll need to be aware that there is a difference of the displayed character when we’re comparing HTML and ASCII, specially when it comes to the extended characters (> 127). HTML also knows a few special characters that don’t even appear to have a numerical counter part.

ASCII/DOS Characters >127, or the extended character set, are not the same as in HTML.
In the table below you will find the HTML counterpart for the DOS characters > 127 (2 extra columns).
This includes the box drawing characters that were very often used in DOS.

Hover over the colored characters to read the character explanation/meaning.