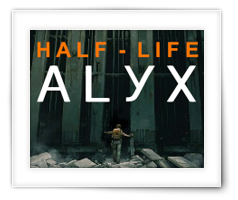 What are Console Commands?

If you’ve never tinkered with the console commands in previous Half-Life games, then this may be a new one for you (Half-Life is not the only game having a “Console” option).

In essence the “Console” allows you to enter commands to be executed by the game engine (Source 2: Developer Page, Wiki Page). It is kinda like entering DOS command.

Some of these commands allow you to enter “cheats” and become invincible, or spawn weapons or other objects, switch maps, turn on the flash light, etc. But not all commands are cheats, some can actually help you tweak the performance on your rig (often at the expense of picture quality etc).

Now personally I believe that cheats have a tendency to spoil the game, so I’m just saying this again:

If you haven’t completed the game, I highly recommend finishing the game before even looking at this article.

Since we’re talking about Half-Life: Alyx, we automatically talk about Steam and SteamVR.
To enter the console, we will first need to start Steam on your PC (Half-Life: Alyx, at the time of this writing, is only available on the Windows platform).

Make sure the game is closed, before doing this.

In Steam, go to your Library, find and right click the “Half-Life: Alyx” title.
A menu should popup where you select “Properties“, which will open a separate window. 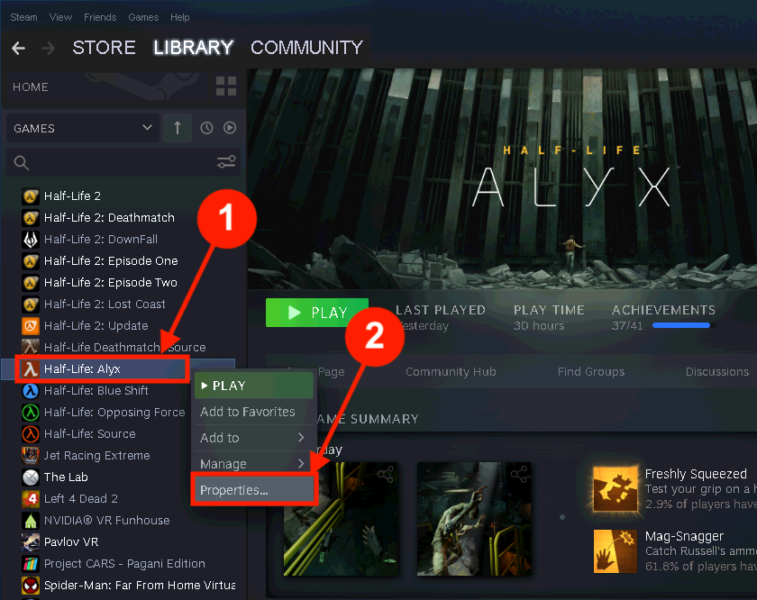 Note: the button may not be there, instead there may also be a field called “Launch Options” for step 4.

Another window will open, where we enter -console -vconsole  in the edit box and click OK when done…

You can can now click the CLOSE button, we’re all done here – the Console has been enabled, so we can access it in the game. 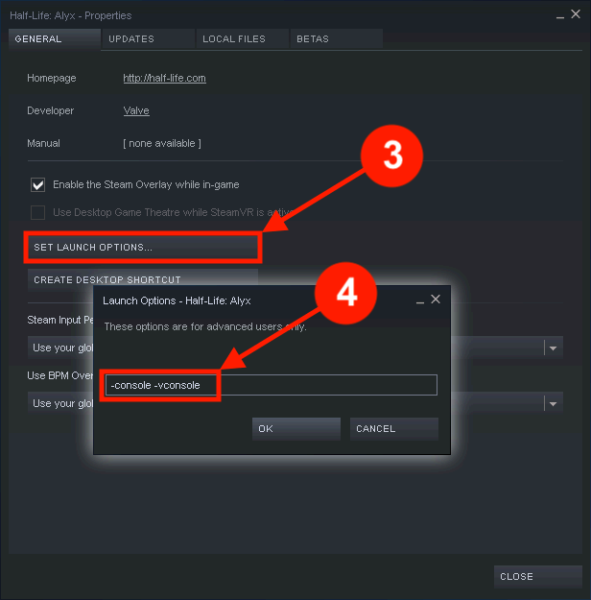 How to open the Console and Enter Commands

The Console can now only be opened when the game is running (!).
So make sure you have “Half-Life: Alyx” running.

The Console will only be visible on your PC screen! NOT in your headset!

Opening the Console in VR is a little tricky, since you will not see the keyboard, AND the Console will NOT be visible in your VR headset – instead it will only display on your monitor or laptop screen.

The easiest approach would be to simply pause the game, and temporary take off your VR HMD (headset).

Next step is to press the tilde ( ~ ) key on your keyboard – the tilde key is located between the Esc key and the TAB key, on the far left side of your keyboard.

With the Console open on your PC monitor, we can now enter command in the “Command:” field at the bottom of the Console window.

Simply type the command in the “Command:” field and press Enter.

In the screenshot below you’ll see some of the details (for available commands, see the commands list below):

The “Command:” field where you can enter commands.

Note that this field has an auto-complete mechanism, which will show a list of matching commands as you type, and allows you to explore other commands and entities that I have not listed here.

In this huge list of text messages, you can see what the game engine (Source 2) is spitting out as a log.

Note: In this example I intentionally made a typo, reflected in the first 2 lines, so you can see what to expect when you did something wrong.

This button shows you a list of commands you have executed, so you can quickly recall them if needed. 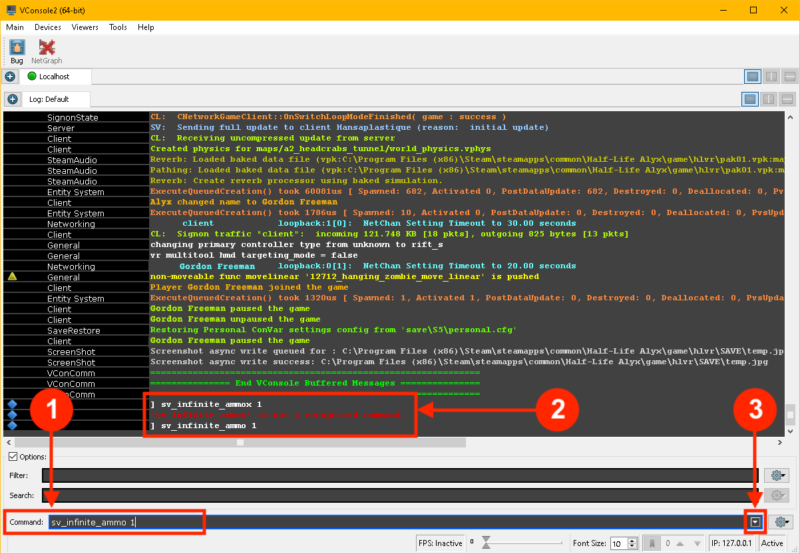 An alternative: The DEV menu

The Console is a common way to go, but if you’re interested in doing some of these commands straight into VR, you could also use the so called “DEV” menu option. Just keep in mind that your options are limited here, but it is much easier to access while playing the game.

To enable the dev menu, follow the same steps as presented for enabling the Console (start here).
The only difference will be to enter -dev  instead of -console -vconsole  in the launch options (Step 4).

The DEV menu will only be visible in your HMD (headset)!

On the left of the picture below, you’ll see what the player menu will look like when the DEV menu is enabled.
Selecting the “DEV MENU” will reveal the menu shown on the right, giving you quick access some some common cheats and some developer functions. 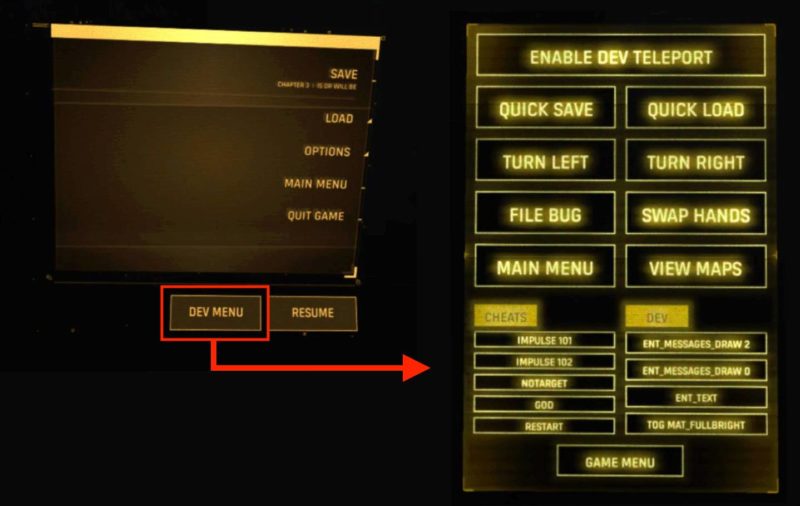 The following commands have been found/discovered by several sources, for use with the Console, and some are the same or similar to the ones seen in the other Half-Life games.

Unexpected side effects, and limited testing …

Please be aware that some commands listed may come with unexpected side effects like:
– Big ERROR messages in your play view
– Items may not spawn
– etc.

Also keep in mind that I have not tested all commands, and quite a few were found online.
The autocomplete function in the console will reveal more possibilities – please comment below if you find something cool that should be added to this list!

Some command take a 1 or a zero as a parameter – Here 1 means “enable“, and zero means “disable“.

Some of the commands listed below will work right away, but most will require that you enable cheat-mode by first entering the “sv_cheats 1” command. This is needed only one time, for each session.

When using cheats (sv_cheats 1), the entire achievement system will be disabled during this session, and for games saved while cheats were active. Which of course makes perfect sense …

A Steam user, flarn2006, wrote a guide on how to tweak the gravity gloves.
If you feel you need to tweak the “Russels”, his guide will be worth reading.

Please be aware that some objects can come with weird side effects.
Most common problems I ran into:

You can spawn items with the “give” command: give <item>

Note: spawning NPCs did not always work all that great at times. Sometimes an item would not spawn, or the item would display a big ERROR message instead of the item (especially when you’re running out of space for the item you’re trying to spawn).
It may happen that a spawned NPC is inactive and does not do anything.
Also not that the list for spawning combine characters appears incomplete as well (Combine Grunt vs Combine Charger).

The following commands allow you to tweak some of the graphics settings, which may or may not be helpful to increase game performance.
I did not really find any of these very useful (except the FPC counter maybe).

You can load any map manually, with the “map” command: map <mapname>

Note: some maps have sub maps as well, which I haven’t listed here.

How to take a Screenshot

Taking a screenshot, for some odd reason, can be a challenge, so here a short list of options (source).
I’m still exploring the option to use something like voice control to take a screenshot instantly, or start recording some of my game play (like the XBox One where you can say “Xbox record this” or something like that).

At the moment of writing this article, the Valve Index seems to be the best of the best.
I’m holding off on this one, until it becomes wireless.

Take a screenshot: Press Trigger + Power buttons and wait for 1 – 2 seconds, then release both buttons at the same time on the same controller.

The Oculus Quest is my go-to HMD (Head Mounted Display), even though the Field of View is more limited than some other HMD’s, it is by far the coolest experience to run around wirelessly (using ALVR). I previously owned a Rift, but after buying the Quest, I had no use for it anymore and sold it.

Take a screenshot: Press the Left Trigger (on the left controller) + Oculus Button (on the right controller).