How to measure temperature with your Arduino and a DS18B20 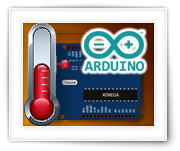 In this example project we will be combining an Arduino and a DS18B20 temperature sensor.

The DS18B20 is a so called 1-wire digital temperature sensor. The words “digital” and “1-wire” make this sensor really cool and allows you, with a super simple setup, to read the temperature of one or more sensors. You can even connect multiple devices together, utilizing only one pin on your Arduino.

The more I play with the Arduino, the more fun it gets

The DS18B20 comes in different forms and shapes, so you have plenty of choice when deciding which one works best for you. There are 3 variations available: 8-Pin SO (150 mils), 8-Pin µSOP, and 3-Pin TO-92. If you look at eBay or Amazon, some of our Chinese friends have packaged the TO-92 version in a waterproof housing so you can use it directly in your fish-tank, water boiler, outside your house or even your freezer, without having to worry about water/moisture shortcutting your electronics (these have 3 wires: Black (GND), Red (Vdd) and white or yellow (Data)). DS18B20 in a waterproof casing

Another cool feature is that you can connect up to 127 of these sensors in parallel, and read each individual temperature. Not sure what I’d do with that, but the ability to combine one or two, for example for the temperature of your fridge and freezer, is a nice option, specially when other pins of your Arduino are being used for other things …

What we need to get the Arduino and DS18B20 to work

The Arduino IDE can be downloaded from the Arduino website (highly recommended), or from Tweaking4All (this version might be outdated by the time you read this article).

The OneWire Library can be downloaded from the OneWire Project Page (highly recommended to get the latest version) or you can download v2.2 from Tweaking4All.

The USB cable is of course only needed to program and power the Arduino during development.
When we run the Arduino computer independent you might want to look for a suitable power supply.

The wiring, this is the beauty of a 1-wire interface, is super simple.

The only thing we need to add is a pull-up resistor of 4.7 KΩ. I have seen ther values, but it seems this is the most commonly used value.

The wiring presented below is the regular way of wiring the DS18B20 with your Arduino.

Make sure that you very line 10 and line 65 in the Sketch below to match your data pin and power mode!

Below a picture of my test setup … it’s really easy. The alternative wiring is called “Parasite” mode, where we do NOT connect the +5V to the Vdd pin of the DS18B20.
Instead we connect Vdd of the DS18B20 to GND. The advantage being obvious: you only need 2 wires.

The downside of parasite mode is that you should limit the number of sensors and the wires should not be too long!
In the end, I’m not sure what to think of the Parasite mode, as I’d like to use this when the sensors are far away from the Arduino, but on the other hand this mode is not very suitable for that. Up to you which you prefer.

Plenty of strange results have been report when using Parasite mode. Therefor I cannot recommend Parasite mode for a reliable setup.

If you downloaded the ZIP file from either OneWire Project Page from Tweaking4All, then you should be able to use the Library Import option in the Arduino IDE software. From the menu, choose “Sketch”  “Import Library”  “Add Library” and select the ZIP file you downloaded.

In case this fails :
The Arduino IDE can’t seem to find the proper directory name in the ZIP file, so the easiest then is to unzip the file, make sure the directory is called “OneWire” (which holds the “examples” directory and a bunch of files) and drag it into the library directory of your Arduino IDE.

To find the examples files in the menu’s, you might need to restart the Arduino IDE.

Go to “File”  “Examples”  “OneWire” and select the “DS18x20_Temperature” example, which will look like the code below.

The code below uses the OneWire Library to conveniently go through all connected DS28B20 temperature sensors (see how to connect multiple sensors at the end of this article) and checks the details of each of them, to then display the data in the debug window (menu: “Tools”  “Serial Monitor“).

The output in the debug window will look something like this:

The DS18B20 can work in a regular mode or in a so called Parasite mode.
The normal mode requires 3 wires, whereas the Parasite mode uses only 2 wires.

Make sure you set the right data pin!

In line 10, where it says “OneWire ds(2);” the data pin to be used is set.
In this example I used pin 2, however the default setting in the example that comes with OneWire uses pin 10.
(I had other plans for pin 10, so I did set mine to pin 2)

How to connect multiple Sensors

The DS18B20 Digital Temperature sensor allows you to set multiple in parallel. When doing this, the OneWire library will read all sensors.
Below I’ve illustrate 2 ways of wiring your sensors for bth methods of powering the sensors.

For larger networks of sensors (more than 10), using smaller resistors should be considered, for example 1.6 KΩ or even less.

It has been observed that large amounts of sensors (more than 10) in the same network can cause issues (colliding data), and for that purpose an additional resistor of say 100 … 120 Ω should be added between the data line to the Arduino and the data pin of the sensor, for each sensor !

The output of the previous demo Sketch for 2 sensors could like this:

It would be nice to know what sensor result you’re looking at when using multiple sensors. So how do I identify the right one?

Since these sensors are digital, they do have a serial number, which can be used to identify from which sensor the originated.
All nice and dandy of course, but you’d need to know the that serial number first, right?

Again: It is suggested, for a large amounts of sensors (meaning 10 or more), to add a 100 … 120 Ω resistor between DS18B20 data pin and Arduino data pin (for each sensor!) to improve reliability. I can’t provide any experience concerning this, as I have only 2 sensors … for now.

Below you will see how we can set multiple sensors in parallel using the regular powermode.

Parasite mode basically drops the wire for Vdd and shorts pin 1 and 3 of the sensor, and the sensor will pull power from the data pin.

Below a list of practical resources, some offering very detailed technical information.