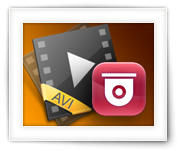 QNAP includes “Surveillance Station” as an application on their NAS devices, which allows you to setup security camera’s throughout your house or business. It supports numerous camera’s, motion detection, alert messages etc.

One problem I did run into however, was that the recordings of my Foscam IP-camera’s could not be played in any of the media players I had on my Mac, only to find out that Windows and Linux users can experience the same problems.

With a simple trick and free software you can either modify the AVI files (very quick!) or convert the videos to another format. The presented tricks work for MacOS X, Linux and Windows.

You probably already know this, the recordings of Surveillance Station can be found in the “Recordings” share on your QNAP, where you will find AVI files of the recordings that have been made, depending on your settings of course.

Note : QNAP got the annoying idea to request purchase of licenses for each camera connected to your QNAP. Previous versions did not require the expensive license, and the latest versions come with only one courtesy license.

The recording format capabilities strongly depends on your camera’s capabilities, since the QNAP does not transcode the video’s.

My Foscam 8910 camera’s seem to like Motion JPEG (MJPG), but other camera’s support h264 etc. In this article I’ll focus on the video’s from my Foscam, but as I have seen in numerous forums, this trick will work for most cheaper IP camera’s as well.

When you try to open one of the QNAP Surveillance Video Recordings, you will most likely get an error message, as for example in VideoLAN VLC as seen below. Notice the ‘VLC does not support the audio or video format “qIVG”.‘ message, where qIVG is the so called FourCC of the video stream.

Other media players will give error messages as well, or simply do nothing at all. Often they lack the detailed information we see with VideoLAN VLC. If you see the “qIVG” message, then changing the FourCC of the AVI file will fix the issue. It appears that “qIVG” can be played with a Motion JPEG (MJPEG or MJPG) codec.

For this we can use several applications like abcAVI and FourCC Changer, but both are only available for Windows. Instead I use a program I created my self: AVI FourCC Fix. You can download it below, or you can look at the article I wrote about how to use this free application. The procedure is simple:

After this procedure your AVI files will play just fine with for example VideoLAN VLC.

Option 2 – Convert the recording to a different Video Format

The second option is to convert the QNAP Surveillance Video Recordings to a different format, and here the free ffmpeg is very helpful. You can find ffmpeg for several platforms on the ffmpeg homepage. I did however find it rather confusing to find a pre-compiled versions for specific platforms. In short, you can find some builds here:

There are plenty other locations to find pre-compiled ffmpeg builds, some of them you can find on the ffmpeg downloads page.

For this we will use the command line and I’ll show you an example for one file and one for multiple files – conversion is relatively fast, but strongly depending on your computer speed.

For more details, like supported audio and video codecs, quality settings, and other options, please read the ffmpeg Documentation.

One file conversion at a time with ffmpeg

With ffmpeg you can convert one file at a time with the following command line statement. The example below only converts the video, as most recordings do not have audio:

If you do have recordings with audio then the following statement can be used (removed the “-an”):

Below an example of a script (works under MacOS X and Linux) in which I used above statements to convert all AVI’s found in the mentioned directory. The example below uses conversion without audio, but removing the ” -an” (do not remove the double quotes) from the 3rd line will convert audio as well.

Save the code below in a plain text file, for example called “convert”, and use  chmod +x convert   to make it executable. On the commandline type  ./convert  to execute your script.

Don’t forget to change the “MOVIES” variable in line 2 to the location where your recordings are.