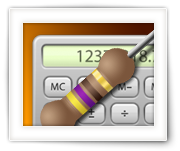 This Resistor Color Calculator allows you to enter resistor color codes to determine their Ohm-age (value), but it also works the other way around allowing you to enter the desired Ohm-age to find out what the needed color codes for the resistor should be.

I’ve had this one on all my old websites since way back in the day … but I do find myself going there often when I’m playing with electronic projects.
At some point I figured, it could use an update and it should probably get a home at Tweaking4All as well.

The updated version can now also calculate with 5 band resistors.

The Resistor Color Calculator can be used for free of course and was written in JavaScript by myself around the year 1999 or 2000.

The original was based on an old cardboard sliding card my dad used to have to determine values and colors and it has been available at WeetHet.nl for years and after a little refresh I’ve posted it here as well.

Usage: Select your color or value in the dropdown lists below and the resistor and Ohm-age calculation will change automatically.

Notes:
1 Modern metal film resistors use an extra band to indicate it’s value, sometimes referred to as a “5 band code”.
2 The temperature (coefficient) ring is often seen with precision resistors, indicating the resistance change caused by temperature changes.
3 The reliability (or: fail rate) ring is rarely used in commercial applications, however frequently used in military applications.

Not all thinkable values are available, in part caused by the fact that all resistors have some sorts of tolerance.
For example, a 100 Ohm resistor with a tolerance of 10% can actually have an value between 90 Ohm and 110 Ohm.

This is why the IEC (International Electrotechnical Commission) create the resistance and tolerance values into a norm, and are referred to as “preferred resistor values” or E-series (standard IEC 60063).

To help you (and myself) find the best matching resistor, I created a interactive table of the defined E-series values.
The most commonly used E-series is undoubtedly the E12 series.

In the table below; check the series you’d like to see. The red boxes indicate that the value exists in these series. The grey boxes indicate that a value exists in a series you didn’t select.
For example, when selecting just the E12 series, you’ll see right away which of the E12 series values also exist in the other series.
You can select multiple series at the same time.

When buying a Resistor Kit

When looking for a nice selection of resistors, you could get started with one of those starter kits you can buy online.
These kits typically include common values, and offer right a few resistors per value – a good start when working with electronics for sure.

However, there are a few points you’d want to pay attention to (from personal experience):

Make sure you read the colors in the right order!

Usually a resistor has either a silver or a gold band at the END.
Keep that one to the right (as seen above). You’re now looking at the proper color code order (from left to right).

Sometimes, specially with damaged or dirty equipment, color codes can be very hard to read.
I recommend using a regular multimeter (Ohm-meter) to measure the resistance (if the resistor is not completely toast).

Note: Keep in mind to not hold your fingers on the contacts of the multimeter testers or the leads of the resistor, otherwise you’re putting yourself in parallel with the resistor and the multimeter will most likely indicate a faulty value!

Note: Do not try to measure resistors in-circuit, as the result will most likely be influenced by the other components in the circuit and therefore resulting in a wrong vale …