Keyboard and Text Tricks for iPad and iPhone Users 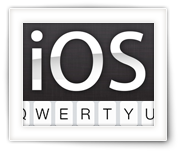 I’ve used iPhones and iPads since the day they have become available, and I have to admit that I did get stuck in my old habits and sometimes forget to look at new features and functionality … specially when it comes to entering text …

In this article, part of a small series of iPad/iPhone tips and tricks articles, I compiled a list of interesting text and keyboard tricks you should look at as an iPhone or iPad user …

You might be familiar with emoticons, those funny smileys to express your mood when texting.

For that purpose the Japanese Emoticon characters “Emoji” have been placed in a font which can be accessed with a special keyboard on your iPad and iPhone.

Unfortunately, some people like you to believe that you have to buy one of their applications for that, but this is totally not the case.
Entering Emoji smileys is done through the standard available Emoji keyboard which you just need to enable.
Settings  General  Keyboard  Keyboards  Add New Keyboard  Emoji

Once enabled, you will see a little globe key left of the space bar on the keyboard. Tap it to toggle to the next keyboard in line, or keep it pressed which will show a little menu where you can pick the keyboard you’d like to use.

Keep in mind that not all phones (older Android and Black Berry phones for example) can display Emoji characters. So when you type an Emoji smiley, the receiving party might not be able to see them.

Keyboards and spell checker for other languages

If you’ve read the tip above, adding an Emoji keyboard, then you might have already seen the option to add keyboards for other languages. This is the place where you can also add multiple keyboards for other nationalities, which allows you to have for example an English, Dutch, French and Emoji keyboard which you can toggle when you’re typing messages.
Toggling to a different keyboard, while typing, will also change the language of the spellchecker.
Settings  General  Keyboard  Keyboards  Add New Keyboard

Entering Characters with Accents and Punctuations

In languages other than English, often special characters are used, like those characters with an accent or an umlaut.
Entering these characters is actually easier than I expected.

Press the letter you want and keep it pressed (see also the screenshots of the next tip). If special characters exist (on your iPad or iPhone), a menu will open allowing you to pick a character. When trying to select special character: slide your finger to the one you need, do not lift your finger up until you are over the desired character.

Next to those letters, also special symbols can be typed in the same manner. These special symbols can be found on the numerical keyboard (press the “123” button in the lower left corner). Try a few of these keys, for example:
– keeping “.” (period) press reveals “…“,
– keeping “$” pressed reveals other currencies like the €, ¥ and £,
– keeping double quote pressed to select different quote types,
– keeping “0” (zero) pressed reveals the character for degree °,
– etc.

Tip : If you’re looking for so called glyphs, try this link on your iPhone or iPad (does not work as well on your PC): http://mrgan.com/gb/

iPad/iPhone – How to enter special characters

In the example overview below, for an U.S. English keyboard, the special characters are hidden under the keys in the blue box. The easiest way to enter these characters is through the Emoji keyboard (see the first tip “Emoji – Free Emoticons and Smileys” on this page on how to install the Emoji keyboard). In the last “group”, on the far right, you’ll find these symbols.

Emoji is rather limited, but does support symbols like Copyright, Trademark and Registered.

A great alternative is the use of a free app called “Fast Keyboard“, which not only gives you access to these symbols, but also provides access to mathematical symbols, and even the apple logo. In the right image below: the marked (red) area can be moved up/down to see more symbols.
Once you’ve entered the symbols, you can paste them in the app you were working in.

The Glyphboard Webpage offers a lot of special characters, including the copyright and trademark symbol, the Apple Logo and some symbols like certain fractions, gender, etc.

Press the character you’re looking for and keep it pressed it selects the symbol. Lift your finger and a “Copy” button will appear.
Select the “Copy” option and paste it in the text that you’re working with. For symbols that you use often, consider creating a shortcut (see below: “Keyboard Shortcuts – Save yourself some typing“).
You could for example paste your symbol in the “Phrase” field and enter a desired shortcut for it.
For example: Phrase = “©” and Shortcut = “(c)”.

Certain Internet oriented applications, like Safari for example, allow you to enter top-level domains like .net, .com, .edu, etc. quickly by keeping the “.” (period) button pressed. The available top-level domains are influenced by what international keyboard(s) you use. For example the Dutch keyboard adds .nl and .be.

By shaking you phone, once left and once right, a dialog will popup allowing you to “undo” what you have been typing. After using this trick, shaking the phone again will offer a “redo” for the typing that was just removed. This works in all apps that allow text entry.

Keyboard Shortcuts – Save yourself some typing

Your iPad and iPhone offers the definition of shortcuts, which can save you a lot of typing. A shortcut will automatically be replaced by what you’ve defined for your shortcut.
For example the shortcut “jk” can be defined as “Just Kidding!!“. Once you type “jk” a popup, as seen with the spell checker, will appear showing you the text it would like to use as a replacement for your shortcut.

Tip : You can add Emoji emoticons to your shortcut!

Adding a period at the end of a line – Double space

Yes, your iPad/iPhone has a caps lock!
Tap the shift key twice and caps lock is engaged, tap it once again to disengage it.

With iOS 7.1 and newer, the coloring of the caps lock / shift has changed. Normal now has a grey background and a black arrow up, Shift pressed has a white background with a black arrow up and Caps Lock will add a line under the arrow to that.

I’m pretty sure that the settings we’re looking at in this tips is rarely looked at, but they can help you get rid of some annoyances. I’m sure quite a lot of people have ran into this issue: the undesired auto correct of profanity.

Option 1: Add your “bad” language to the “Keyboard Shortcuts“.
Simply set “Phrase” and “Shortcut” to the same word (ie. the profanity of choice in both fields).

Option 2: Add your “bad” language as a contact.
Add a contact named as the profanity of choice.

Note : I’m not sure, but it seems that newer iOS versions “learn” what profanity you like or not.

English word contractions (like You’ll, He’ll, I’ll, I’ve, etc.) can be entered easier when you trick the Auto-Correct of your iPad or iPhone.
The trick is simple: at the end of the contraction type the last character one extra time. Of course, this is not always needed, as the auto-correct picks up certain contractions right away.

Some example: When trying to type “We’ll“, simply type “Welll“.

Enter numbers without switching to the numerical keyboard

A nifty little trick, when entering text where you’d like to insert one or two numbers:
Press the “123” button and keep it pressed, now slide over to the number (or punctuation). Lift your finger up when you’re above the number you’d like and it will be entered. Your iPad or iPhone will jump right away back to the “ABC” keyboard.

Dictonary – Getting the definition of a word

To select a word, you can optionally double tap a word.

Tip : When looking at a definition, you see a button “Manage” in the lower left corner. This function will allow you to add dictionaries of other languages.
If you see that words cannot be found, then check this function to make sure the dictonaries of the language you’re using is downloaded.

iPad/iPhone – Get the definition of a word

Your iPad/iPhone actually comes with voice recognition build in – it’s mostly used when using Siri (keep the “Home” button pressed until you see the “What can I help you With”) but it can also be used to dictate text. When switching Siri ON, make sure to select the right region below it as well – for example: there is a significant difference between British English and American English.
General  Siri

Voice dictation is available when Siri is enabled. For supported languages, you will see a little microphone button left of the spacebar in your keyboard. Tap it and start talking, tap “Done” when done.

A few tips when using dictation:
– Talk into the microphone of your iPhone/iPad
– Make sure the sound wave (image on the right) actually moves
– Articulate and pronounce words properly
– Don’t speak too fast
– Pronounce punctuation (comma, period, hyphen, apostrophe) matching your region (“period” in British English would be “full stop”)
– Say “new line” to start a new line
– Say “new paragraph” to insert two new lines.
– You can use currency as well (dollar sign, euro sign, pound sterling sign, Yen sign)
– Emoticons (not Emoji!) that are supported: “smiley” for :-),  ”winky” for ;-) or “frowny” fo :-(
– Always verify if the voice recognition picked up the words right
– Work with short sentences or short chunks of text

At this moment, that I’m writing this article, only the following languages are supported for voice dictation and Siri:

To use voice dictation, you will need Internet access, and it works best with Wifi or 3G/4G. Anything slower than that (EDGE, GPRS) will work very slow and less reliable.

On the iPad you can actually split the keyboard in two smaller keyboards which kind-a reminds one of the Microsoft Natural Keyboards.
Some refer to it as a thumb keyboard.

When a keyboard is visible, place two fingers on the keyboard and move them in opposite direction to the sides.
This will show the split keyboard. You’ll notice that the 2 keyboards appear smaller than the original keyboard.

Doing the reverse, sliding a finger from the left and one from the right, to the center of your keyboard, will bring back the normal keyboard.