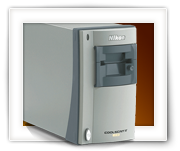 For this I used the excellent Nikon CoolScan LS-50, also known as the Nikon CoolScan V ED. These scanners perform superb, even though Nikon stopped producing them. Even support has been stopped or reduced. If you need one, eBay is the place to go.

In the process of scanning all these negatives, I ran into the problem that it had swallowed the film strip, and the entire scanner refused operation right after that.

Please note that this article was written with the LS-50/V ED in mind, but it seems that other Nikon CoolScan models might be fixable in the same fashion (i.e. 4000 [IV] and 5000, and other models that look similar).

What makes your Film Strip get stuck in a Nikon CoolScan?

This problem occurs with other similar Nikon CoolScan models as well, that can handle the SA-21 film strip adapter.

Typically, the SA-21 film strip adapter of the Nikon CoolScan, looses “grip” on your film, and then you’re stuck. Well, the film is stuck inside the scanner. You’ll see the green light blinking, indicating an error, and the adapter can no longer be removed. The latter I’d call a serious design flaw, but oh well … the performance of these scanners more than compensate for this little inconvenience.

Your scan software, I use VueScan, will most likely indicate that there is “no film inserted”, or “film not properly inserted”. Using the film Eject function however fails, and the scanner appears dead …

How to avoid film strips getting stuck …

I’ve noticed that the following will help minimizing film strips getting getting stuck:

One of the limitations I’ve ran into was the fact that the Nikon adapters are only capable of handling:

Naturally, I had other film laying around like 110 and 126, which are not supported.
I did however find a company called FilmScanUSA (product link – unfortunately the link seems dead) that offers adapters which insert into a MA-20 or MA-21. These are much cheaper than used Nikon adapters (for example the FH-2 and FH-3) and support plenty other film sizes. At the time of this writing, they offer: 110, 126, 35mm, APS, Minox, and even 8mm film.

I’ve used a few of their adapters and they are of good quality and work as expected. I highly recommend it!

Before we proceed, make sure you have a proper fitting Phillips Screwdriver, and some patience.

The process is quite easy, once you’ve seen how it’s done. So for the less brave, and I have to admit that I was nervous too, here a quick demonstration how it’s done …

Make sure to shutdown your Nikon CoolScan, unplug the power cord, and unplug the USB cable.

Step 2: Remove the 6 screws in the back

At the rear of the scanner, you’ll notice 12 screws, you only need to remove the 6 circled ones in the image below. Do not remove the other screws. Step 3: “Open” the 4 rubber feet at the bottom and remove screws

At the bottom, you’ll find 4 rubber feet under which we will find a total of 4 screws that we need to remove.

The rubber feet or covers cannot be completely removed as they are attached to the side/top rubber strips of the scanner. Thank goodness they are not glued, but it takes a little effort to open them by pulling one corner loose.

Once opened, remove the screw you found under the feet. Step 4: Slide the hood off.

To remove the hood/casing, I’ve found this to work the best by first placing the Nikon CoolScan upside down on a flat surface. With all 4 screws at the bottom and 6 in the back removed, you can now slide the scanner mechanism out of it’s hood/case.

In this next step we will try to unlock the film strip adapter, in my example a Nikon CoolScan SA-21.

This adapter is mechanically locked, and that’s why we can’t remove it the usual way. I’d say this is a minor design flaw, in an otherwise well done device, as a small emergency eject button would have prevented the need for opening up the scanner all together.

The locking mechanism is a simple small pin, which needs to be pressed for it to release the adapter. However, in most circumstances you cannot even see this pin as the mechanism is usually in it’s “back” position, which causes it to be covered by the control board of the scanner (hidden behind the large metal cover in the pictures).

Now we could of course remove the controller board, but thank goodness that’s not required.
By turning the little white cog wheel in front we can move it to it’s “forward” position so we can access the locking pin.

This cog wheel (white in figure 4), can be found in the front of the scanner, near the bottom.
Turn it gently with your finger until you see the locking pin (part 2 in figure 5). Now that we can reach for the locking pin, time to remove the film strip adapter.

This is done by gently pressing the pin (see part 2, figure 5) down, for example with a screwdriver.
Keep it pressed down while gently removing the film strip adapter from the scanner. Step 7: Clean up and reassemble the Nikon Coolscan

After we have removed the film strip adapter, check if there is any debris left in the scanner. In all the times I have taken my scanner apart, I did not find anything, but it’s better to be safe than sorry, right?

Next we can put the hood back on the scanner, and here again I’ve found it easiest to work with the scanner being upside down. Make sure the front is snug to the hood before doing anything else. I’ve found that on occasion the hood won’t slide on all that great.

Next, we place the 4 screws back under the rubber feet, and reattach the rubber feet.
I’ve found it easiest to insert on of the rubber pins first and then rubbing the rubber with your thumb, back and forth a few times, until everything feels like it’s back in place again.

After all rubbers are back in place, screw the 6 screws back into the back. Step 8: Remove the film strip from the adapter

In this last step, we are going to remove the film strip that got stuck in the adapter, which is quite easy with the SA-21.

First we press the little “button” so the front part can open. After that we lift the top, which comes off the adapter entirely.

Once opened you can remove the film strip and/or debris you might find there.

After cleaning things up, reassemble the SA-21 and you’re good to go for scanning more film strips. To avoid this from happening again, read the suggestions at the beginning of this article.