pfSense 2.x – How to fix Strict NAT for XBox One 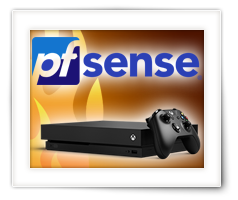 I’m always up for playing with new toys, and this time I did build a firewall using pfSense. I wanted to play with OpenVPN and my NetGear R7000 Nighthawk (running Asus xWRT) capped out at 5Mbps. So I migrated to pfSense.

However, doing so, my XBox One decided to not like this and detected STRICT NAT – which results in limitations with online gaming.

In this article I’ll show you how I fixed this with pfSense so NAT now shows as OPEN (keep in mind that I’m NOT an expert).

Note: This may apply to PlayStation 3, PlayStation 4, XBox 360 and other consoles as well.

Well, if you are unfamiliar with pfSense, then this article may not be for you … unless you want to go build your own firewall as well of course.

OPNSense is a great pfSense alternative!

OPNSense is just as good (IMO) as pfSense – after years of using pfSense, OPNSense has now become my favorite though.
Both are great firewalls though and in my case I initially only switched to OPNSense because of its WireGuard support (by the time you read this, pfSense will probably support WireGuard just as well, I think).

In shot : Everything described here works just as well with OpenSense. (they do have history together

pfSense is one of the most used open source firewalls which runs on it’s own dedicated hardware. Having played with it, and using it right now: it’s awesome!

The common “at home” setup for pfSense is shown below, I even included the XBox One – which initially showed STRICT NAT … (drawn with Draw.io)

In this diagram you’ll see the pfSense firewall as a separate box, which indeed the case in my setup. I’ve used a small computer for this.
The ISP Modem is set in bridge mode, so it’s basically a dumb device translating the signals from the ISP (cable, fiber, ISDN, etc) to network signals. So no DHCP, no Firewall, etc. – pfSense handles it all. 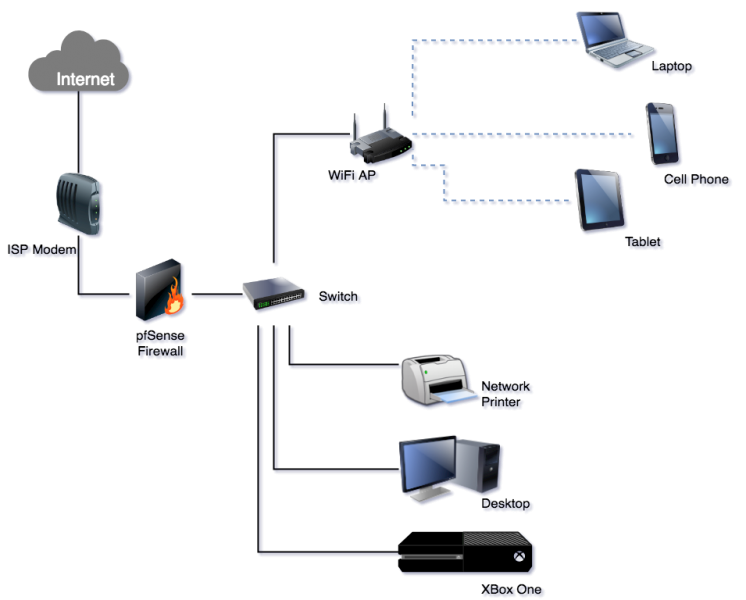 Off the bat, pfSense is configured pretty good. Just one problem I ran into … my XBox One was very limited when it comes to online gaming due to a STRICT NAT. This implies that you can join a multiplayer game and that you can chat … but you cannot host a multiplayer game. Not to mention all kinds of unexpected errors making live miserable.

pfSense – How to fix STRICT NAT

There are several ways to fix the STRICT NAT situation.

Placing the XBox One in a DMZ (DeMilitarized Zone), means that your XBox will be exposed to the Internet without any protection – which actually may be fine. I used a small computer with 4 Ethernet port (network) ports. One port used for WAN (Internet) and one for LAN (my devices). I could use one of the remaining ports specifically for DMZ purposes. If you’re interested in this approach then consider reading this article: How to create a DMZ with pfSense 2.4.2.

Personally I try to avoid using the DMZ approach if I can. Just feels like I’m opening more than I should to make things work. But … it most certainly is an option.

My preferred method is by setting the appropriate rules and only allow and open what is really needed – there is no need to leave the door wide open.

pfSense – OPEN NAT for your XBox One

The following method should work for the XBox One to get rid of STRICT NAT and end up with an OPEN NAT, and can be applied for multiple XBox One devices.
Unfortunately, I do not have other consoles like the Play Station 4 or the Nintendo Switch (nasty thing with money – you can spend only once).
From what I have seen; this most likely works with other consoles as well. Your milage may vary.

Not a Firewall Expert

Just a warning: I’m most certainly not a firewall or a pfSense expert.
Everything presented here is from what I have read and tested on my own setup.
Suggestions, and improvements are most welcome.

Step 1: Give your XBox One a fixed IP address in pfSense

We are going to be adding some rules to the pfSense firewall. To make sure these rules apply to the right devices, we must have a known IP address for our XBox One device(s).

This can be done it two ways: either you assign a static IP address to your XBox One or you reserver the IP address for you XBox One in the DHCP of your pfSense setup.

Since I use DHCP for my network, I decided to use the most obvious: tell my DHCP to use a fixed IP address for my XBox One. You can apply this to all your XBox One devices in case you have multiple.

Determine an IP Address for your XBox One

Note: I assume that your LAN connection is called “LAN” in your pfSense enviroment.

Go to the “General Options” and take note of the range used by your DHCP – we will need this to pick an IP address.

You will have to determine what the fixed IP address of your XBox One should be.
Make sure you pick an IP address that does not fall in the range used by your DHCP!

Note: If you have more than one XBox One, pick a unique IP address for those as well.
Note: If the range prevents you from picking one outside of the range, then please change your DHCP range to make some room.

Define a fixed IP Address for your XBox One

Next; scroll all the way to the bottom (under “DHCP Static Mappings for this Interface“) and click the “Add” button. A new page will load.

Fill in the form as shown below, and make sure you pick the IP address you selected for your XBox One. 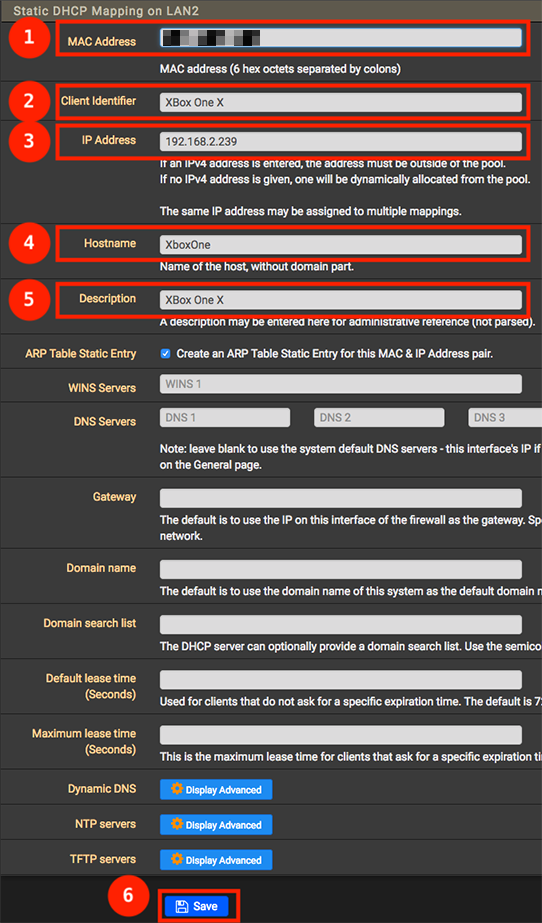 pfSense – Define Fixed IP Address for your XBox One

After click the “Save” button you will get a message, stating that static mapping has changed. Click the “Apply Changes” button.

The next step is to enable UPnP in your pfSense setup, to do this, go to: Services UPnP & NAT-PMP.

In the image below, we did the following settings:

Note: repeat steps 7 and 8 for each additional XBox One you have. 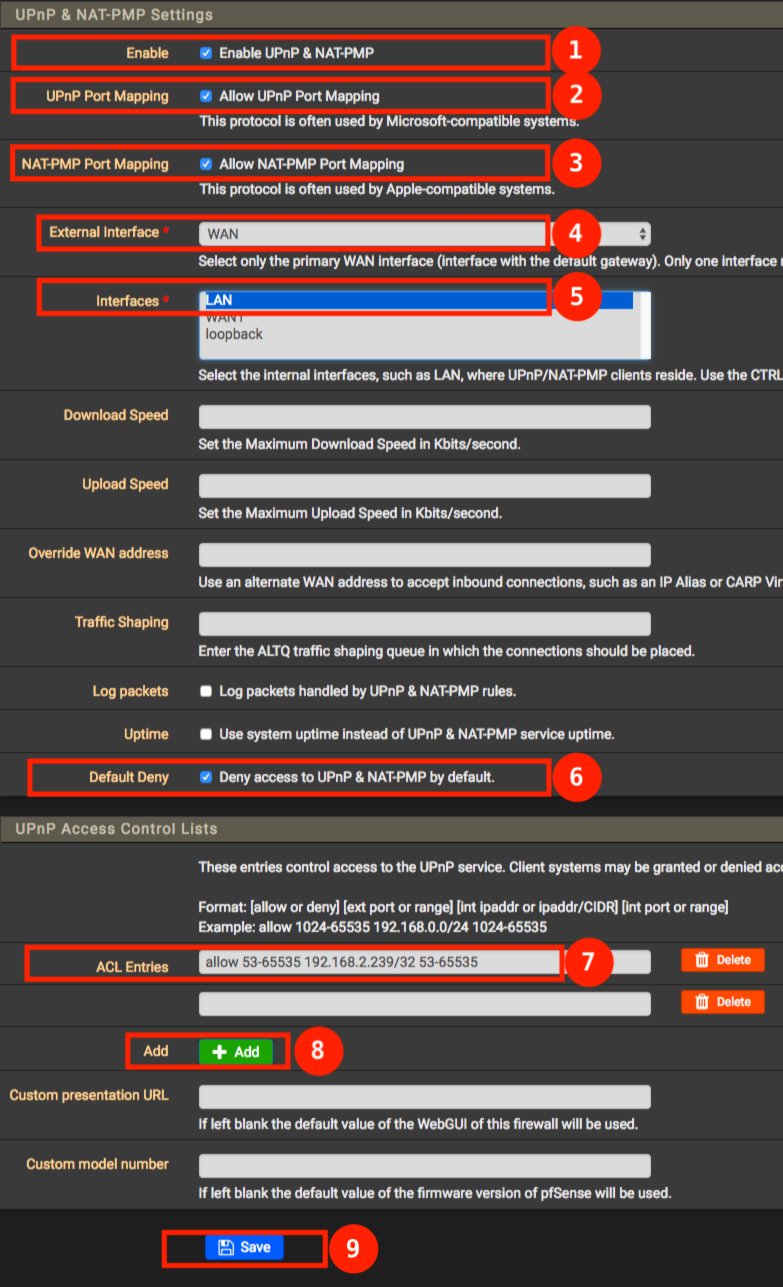 pfSense – Enable UPnP for your XBox One

First we need to set our outbound NAT to Hybrid:

We additionally need to add a so called mapping rule: click under “Mappings” the “Add” button that points up.

Note: Make sure you did NOT check “Disable this rule”.

Note: For additional XBox One devices, rinse an repeat these 8 steps for each console you’d like to add. 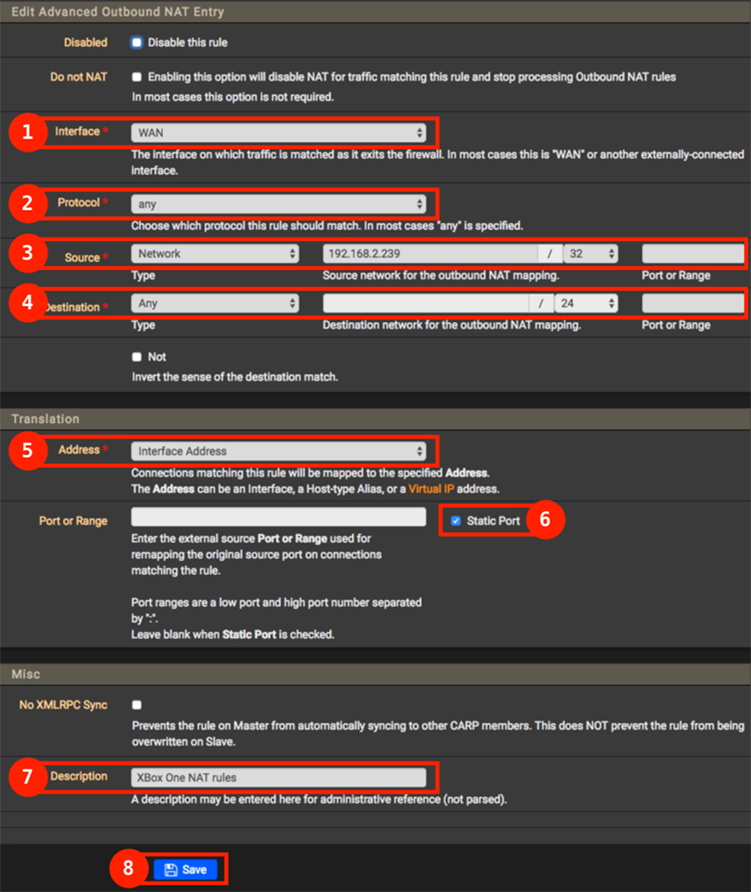 Now this may or may not be required, but I did it anyway.

A great tip from Charles (below) as an alternative to rebooting your Firewall:
You can just flush the active connections: Firewall  Diagnostics  States Reset.

I did get another tip on this, related to Universal PnP: you can restart the service.

Personally, I’m a little paranoid when it comes to things like that and choose to reboot – it takes only a few seconds on my setup.

A few links that provide useful information related to this topic: