What is RAID and How RAID works … 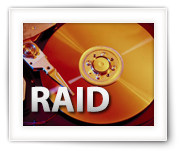 The need for more and more reliable data storage space keeps increasing as we move forward in time. Our picture files get bigger, we scan our documents and we collect more videos than ever before.

For more storage we used to simply buy more hard-drives, internal or external. But eventually we have a wide collection of individual drivers each with their own mount point (drive letter under Windows). This is where RAID can help and combine these individual drives to one big drive. More and more computers are RAID capable.

RAID allows us to combine drives, increase speed and improve reliability so we can store more data while our data is stored safer. But it’s not all that straight forward, so in this article a description of what RAID is, what kinds of RAID you might run into and how RAID works …

As an example, based on Windows and 3 hard-drives of say 1 Tb:
Without RAID, taking Windows as an example, 3 drives could be seen as the drives C:, D:, and E: of each 1Tb (if each drive would have one partition).
With RAID these 3 drives can be combined to a single hard-drive, C:, with a capacity of 3Tb (depending on the RAID configuration you choose).

In the end RAID is an umbrella name for different variations of combining hard-disks that would then appear to your computer as one single hard-disk.

Multiple disks are combined with different goals in mind, hence the different variations.
Goals can be Faster access to data, more storage space and/or higher reliability.

These variations are named “RAID” followed by a number. For example RAID 0, RAID 1, etc. Each fitting for a particular purpose (see list below).
The different variations come with different levels of speed, reliability, availability and the minimum number of hard-drives needed.

RAID-Z are improved RAID variations. They are commonly used with the ZFS filesystem on (for example) a TrueNAS setup, formerly known as FreeNAS, an open source NAS system.

Where can you find RAID?

Back in the day RAID was mostly used with so called File-Server, RAID controllers where expensive and dedicated controllers were the only way to get a RAID array setup.
Now-a-days RAID can be found in pretty much any computer, server, external disk array or NAS (Network Attached Storage), where the “controller” can actually be hardware or software.

Note : RAID is available for most hard-drive interfaces like SCSI, IDE/PATA and SATA variations.

Hardware RAID controllers are either fixed on the motherboard of a computer, or an add-on card (PCI, PCI Express, etc) or found in an external RAID array solution.
Please note that not all motherboards, external RAID arrays and even RAID controllers that claim RAID support actually have RAID support implemented as hardware. Specially the more affordable models often implement RAID in software.

Hardware RAID is the preferred RAID implementation, as it performs faster and seems more reliable, but it comes at a higher price.

Some hardware RAID solutions have a battery backup to protect your RAID during power failure (easy to create yourself by using a regular UPS unit of course). RAID on a motherboard (Adaptec SATA)

As a cheaper alternative to hardware RAID are RAID solutons implemented in software. This can be a part of the BIOS, firmware on a cheaper RAID controller card, or a driver in the Operating System (no special hardware needed).

The downside of RAID in software is that it performs slower than hardware implementation, although modern solutions perform pretty well, and possibly less reliable compared to a hardware solution.

Getting started with RAID

Before starting with RAID, I highly recommend starting with making a choice what RAID variant you’d like to use.
Your choice can be influenced by quite a few factors and I usually start out with these questions:

Purpose of your RAID

My RAID setup, as an example, is used as a file server (QNAP NAS).

It runs 24/7 and I’d like it to stay cool (heat reduce the life span of your equipment), so I use hard-drives that run at a lower speed (5400 RPM) so the drives stay cool and use minimal power. Another advantage of low RPM drives is that they are QUIET …
Speed in that particular case doesn’t really matter much – after all: all data is being pushed through a slower ethernet or Wifi connection.
For me reliavility is more important than speed anyway, therefor I chose RAID 6 for my configuration.

When looking at these configurations you might notice that there is a trade-off between PERFORMANCE – RELIABILITY – STORAGE SPACE.
If you for example want a higher speed, then you’ll see that reliability and/or storage space will be reduced.
Dito for Reliability increase which will affect performance and/or storage capacity.

RAID is not a BACKUP!

Although RAID cannot replace a real backup, it most certainly can contribute to a more reliable storage of your data, specially when using RAID 5 or RAID 6.
Backups however have the advantage that you can actually resort to older backups if needed. RAID however will not give you that ability. Once something a file is updated on your RAID setup, the data will be [high probability] lost.

In RAID 0 data is written in parallel to 2 or more disks. Think of it as writing block 1 to disk 1, block 2 to disk 2, block 3 to disk 3 etc.
Minimum number of required drives: 2 drives (even number),
Space efficiency: 100% of the sum of the capacity of the drives.

PRO:
The great advantage is SPEED as data is written or read in parallel. Another advantage is that all of the storage capacity will be available for storage.

CON:
The big downside is lack of reliability. If one disk crashes all data is gone, as half of the information will be lost.
Unless you’re in real need for speed, I would not recommend this for regular use. RAID 1 arrays mirror de data of one drive to another drive. So when your computer writes data to the array, the controller will actually write the data twice: to disk 1 and to disk 2.
Minimum number of required drives: 2 drives (even number),
Space efficiency: 50% of the sum of the capacity of the drives.

PRO:
Increased reliability since data is always saved in duplicate on two different drives. If one drive dies, the other will still be able to provide you the data.

CON:
Not very efficient when it comes to remaining storage, as you need at least two the same drives, but in the end only have the storage space of only one drive. RAID 2 uses striping on bit level, which theoretical could come with very high transfer rates (speed).
However, at this point there are no commercial applications available that utilize RAID 2.
Minimum number of required drives: 3 drives.

CON:
Not used/available in RAID controllers.

RAID 3 and RAID 4 simplistically put work the same way. The difference between the two is that RAID 3 works on byte level where as RAID 4 works on a block level. RAID 5 works in essence the same as RAID 4 (block level), but instead of storing all the parity blocks on one drive, the parity blocks are evenly spread out over all drives.
Unlike RAID 3 and RAID 4, RAID 5 is used very commonly and performs better than either. As with RAID 3 and RAID 4; if one disks fails, the missing data can still be calculated based on the existing data.
Minimum number of required drives: 3 drives,
Space efficiency: Sum of the capacity of all drives – ( Sum of the capacity of all drives / number of drives )

CON:
Not really a “con” but RAID 6 is even more reliable with similar performance. CON:
The remaining capacity will be lower than RAID 5. Certain RAID variations can be combined, depending on your RAID controller of course, and are referred to as “Nested RAID“.

PRO:
Custom RAID. You can configure your own fitting your own needs.

CON:
Not all RAID controllers support this and the resulting storage capacity will be much lower than other configurations. JBOD, or Just a Bunch Of Disks, is not a RAID variation, but most RAID controllers support it.

With JBOD, basically hard-disks are stringed in a sequence, offering the sum of the capacities of all hard-disks in the string.
When writing data to the “array”, first disk 1 will be filled and when full, disk 2 will be filled, etc.
There is no speed gain here, and when a drive fails in a JBOD the not all data is lost, only the data on the defective drive.
For JBOD disks do NOT need to be of the same size.

CON:
No increase in speed or reliability. JBOD – Just a Bunch Of Disks (not RAID!)