Video – Adding movie information (Metadata) to your MP4 or M4V 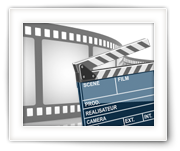 Adding Metadata (additional information like: poster/cover image, chapter titles, movie synopsis, actors, etc) to an existing MP4 or M4V file is not a requirement. It does however make your MP4 or M4V shine when viewed on devices or programs that read the metadata.

You might have seen it when you bought a movie or music clip from iTunes: It has a nice little poster, with proper title and movie description, actors, proper chapter names, etc).

In this article I’ll show you how you can do this adding of metadata or “Tagging” yourself under MacOS X, Windows, and even Linux.

Metadata, or data about content, for a movie file like an MP4 or M4V, is information about the movie (data) stored in the file.
Are you confused yet?

OK how about this – a list of possible Metadata you could add to a movie file:

You probably have seen it with music as well – where metadata is being used as well.

Adding Metadata to an MP4

As you might already know, an MP4 file is in fact a so called container that can contain multiple “files” (as a figure of speech). Audio, Video, Subtitles and a list of chapters. The same way we can add the so called Metadata – we just need the right tools for it.

Note : Other so called “container” files like AVI, WMV, MOV, WMV and MKV have comparable options to add metadata. Sometimes they do require a different applications to do this though.

Below a short list of possible tools, based on Operating System:

Before and After adding Metadata

Just an illustration (based on iTunes) what the difference with and without metadata can look like: iTunes After Metadata was added …

Although there appears to be a MetaX version for MacOS X as well, rumor is that it’s kind-a “dead”. Not sure if this is true but a remake of MetaX called MetaZ is the tool we’ll be using here. Alternatives are MetaMovie and iFlicks, neither of them are free but iFlicks does offer a trial version.

Unlike the Windows MetaX, MetaZ is only geared towards the tagging of MP4 (and M4V) files, maybe because AVI and WMV files are not commonly used on Mac’s. If you have AVI or WMV files laying around, consider converting them to MP4 or M4V.

We do offer MetaZ as a download, but as always we’d like to urge you to go to the MetaZ homepage and get the most recent version.


MetaZ comes in a ZIP file, so after download unzip the file first.
Move the extracted MetaZ file (see icon below) to your “Applications” folder.

Icon of the MetaZ application Start MetaZ and drop files in the “Files to Write” area

Adding files is easy: either press COMMAND + O to select files, or drag the file(s) to the “Files to write” list on the right side of the MetaZ window (as illustrated above) or drop the files on the MetaZ icon in the dock.

Next click the file (on the right) that you’d like to work on. MetaZ will use the filename as a guess to what the title of the movie could be, which you can see in the “Search” box. There you can correct the title to search for (press Enter to start the search). A partial of the title will work as well, but keep in mind that the partial is not too generic. For example just “Star Trek” will produce quite a long list.

MetaZ will no pre-populate the fields with the information it found on the Internet (using tagChimp, theMovieDB and others). Click through the different tabs, “Info”, “Video”, “Sorting”, “Advanced” and “Chapters” to verify the information. pretty cool though, there is a nice little poster of the DVD and the chapters even have titles. Once you’re satisfied with the found information, make sure the  checkmarks next to the boxes (especially on the “Info”, “Video” and “Chapters”) are checked!

Finally click the “Write” icon to write the metadata to your movie file. On my computer, a 1.3 Gb M4V file took 4 seconds to write.

All though MetaX is not free ($9.95), and maybe not even the prettiest tool out there, but it does what it does very well. You can download a trial version first (highly recommended).
I used a trial version for this article as I work primarily on a Mac.

As usual, we try to offer the download straight from our website, but we strongly suggest that you visit the MetaX homepage to get the most recent version! The download we offer here is only a trial version!


MetaX is not limited to MP4 and M4V when it comes to adding metadata. I also supports MOV, MKV, WMV and AVI. Also keep in mind that MetaX retrieves it’s data from movie information sources like theMovieDB, theTVDB, tagChimp, Amazon

and more which is going to save you a lot of work.

MetaX used to have a bug that causes it to crash if you have Microsoft Groove or Sharepoint installed.
Uninstall those features of Microsoft Office, if you run into this issue, and MetaX will work fine. Click the blue folder in the upper left corner to open a file dialog. In the file dialog select your movie file and click “Open“.

MetaX will now guess the name (shown in the “Search” box) of the movie based on the filename. Correct the title if needed and click the “Search” button which (hopefully) will produce a list of results MetaX found at it’s several sources on the Internet.

If the list remains empty:
Check the title in the search box for typos and other mishaps – you can also just enter a part of the title. Similar named titles will now also appear in the list, so be careful what you enter. For example the phrase “Star Trek” would generate a ginormous list of “matching” titles.

From this list, click the title you think matches best. In my case it’s the rip of my DVD, so I would pick the DVD version from this list. Once clicked you will see that MetaX in no time retrieves and displays the information it found: When flipping through the tabs “Info”, “Video”, “Advanced”, “Sorting” and “Chapters”, you will notice that everything is filled in with info MetaX found – even the chapters have titles now and a picture of the DVD box is there as well. Cool beans!

Verify the information and correct if needed.

The next step is to add this movie to the “Queue” – this Queue is being processed in the background while you can keep working on the next movie.

Click the big red arrow to add this file to the Queue.

MetaX – Add the movie to the Queue

Now repeat these steps for as many movies as you’d like to add metadata to.

A movie in the queue that was completed will appear as such (watch the checkbox before the movie title):

MetaX file in the queue – done!

And that’s all there is to it.

Note : Alternatively you could give the free Microsoft Media Player build-in tools or free Zune tools a chance. There are quite a few tools to be found when you google it that are darn good as well like Media Center Master, etc.

Finding a tool to easily add metadata using a GUI application to an MP4 under Linux has proven to be quite challenging – let alone find the data online and automatically tag video files. There are some tools out there that are command line based, like AtomicParsley, but that’s not what I’d want to use for this purpose.

Since neither options are “automated”, I’d recommend using VLC (VLC can do this under Windows and MacOS X as well).
Installation of VLC is straight forward using APT (Ubuntu users: install VLC through the Software Center).

Start playback of your movie in VLC and click from the menu “Tools”  “Media Information” (or press CTRL + i).

A window will open showing the metadata of the file you’re playing.

In this window (under the “General” tab) you can edit a few metadata tags. Once done editing the fields click the “Save Metadata” button.

Note :
In the example below you see a thumbnail image (in the lower right corner), when you right click it, it will show a “Download Cover Art” option. Frankly: I have no idea what it does. I do know that Copy/Paste and dragging an image on that picture does not seem to do anything. VLC – Edit metadata and save it